Winnie the Pooh, that well known little bear is again making publicity. The film, Goodbye Christopher Robin, is being released this October. What a great opportunity to revisit the fascinating story of the author behind the beloved classic children’s character. 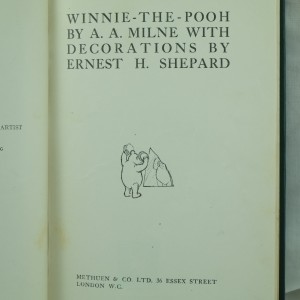 And a chance to remind a bibliophile of the appeal and value in acquiring a set of the Winnie The Pooh volumes. There is certainly plenty of scope for building up a varied collection of books along this theme.

A. A Milne spent his early literary career writing suspense novels and plays yet he presented the character of the lovable bear to his publishers, Methuen in the mid 1920’s. They agreed to publish his book of poetry, When We Were Very Young, in 1924 and the rest, as we know, is history.

Winnie the Pooh quickly followed and was published in late 1926 with great success. The third book, Now We Are Six, was released in 1927 with a run of 50,000 trade copies. It success was immediate achieving more sales of the previous two books in just two months. The House at Pooh Corner, 1928 was Milne’s final book in the series and one in which he introduced the character of Tigger. With the public’s knowledge that this was the last in the series the publication of 75,000 copies sold out quickly and Tigger became a popular new character. The books with their iconic illustrations by the talented Ernest H. Shepard have remained highly sought after collectors items.

Collectors of these books need to look out for particular markers of their first edition status. The first book of poems, When We Were Very Young, has blue boards with gilt character illustrations. It has no “page ix” marked and is distinctive from the second printing copies which do have that printed on the contents page. A first edition and first printing copy is the clearly the rarest of the four titles and in a fine condition with a dust jacket it can fetch a four figure sum.

Milne’s next book, Winnie the Pooh, features Christopher Robin and Pooh as the central characters in a series of stories in their own right. Copies with immaculate green cloth bindings and E. H. Shepard’s stamped gilt illustrations of Pooh and Christopher Robin are sought after items. First edition copies are distinguished by the yellow pictorial dust jacket and 117th thousand printed on the back flap with 7/6 net pricing on the spine. The book has distinctive illustrations of the map of the “100 Aker Wood” on the front free pages.

Milne wrote Now We Are Six as a collection of 35 verse poems. He dedicates the book to Christopher Robin’s childhood friend, Anne Darlington stating, “now she is seven and because she is so speshal.” The UK edition is bound in maroon cloth with the typical gilt illustrations. Likewise, the pink endpapers feature E. H. Shepard’s illustrations. The first edition dust jacket is very pale and a fine copy is hard to find. Any copy with a provenance is clearly a bonus. Our copy with playful comments between the authors, H. G. Wells and A. A. Milne, is a lovely find.  They comment of the words “now she is seven and because she is so speshal” with H. G. Wells adding “when Alan was six, I was nix”.

The House at Pooh Corner is last of the Milne’s books in the series. Fine 1928 first editions will be notable for bright salmon pinks covers with gilt illustrations of Pooh and Christopher Robin stamped on the front board. Again the end papers are illustrated by E. H. Shepard. Any accompanying dust jackets will have the charming illustrations of the characters on the front covers and spine. This edition is prone to fading so a bright copy can be hard to track down.

For a collector a wish list would include deluxe versions of all the books. These deluxe editions came out in the same year as the trade editions except for When We Were Very Young which was released at the time of the seventh edition. Of course signed copies of the quartet with dust jackets in fine condition would complete the wish list. A bibliophile can seek a library of UK editions published by Methuen, London or U.S versions published by Dutton & Co, New York.

All the first editions were followed by a limited first edition run printed on handmade paper, and often known as “Large Paper” copies. Small numbers were released making them scarce and valuable items. Only 100 copies of When We Were Very Young were ever published. 350 copies of Winnie the Pooh signed by Milne and Shepard were released by Methuen in 1926. These copies are distinctive because of their two-tone blue boards. The U.S. limited edition of this book was also published in 1926 with blue and pink boards. Only 200 numbered copies and 26 lettered copies are available. The third book had only 200 “Large Paper” copies released with salmon paper boards, a beige buckram spine and a printed paper label on the front board. Finally the last in the series, 350 signed copies of The House at Pooh Corner was released with cream paper-covered boards, a blue buckram spine and a printed paper label on the front cover. All of these editions are highly sought after books and make a very desirable set.

Of course, once you have sought out a fine set of the Pooh books you might want to move onto completing the collection of all of Milne’s other fine works  – but that is another story…

Here are more A .A. Milne first editions