The first edition in French of Gulliver’s Travels, published anonymously. This translation never enjoyed popularity in France, simply because the title Voyages du Capitaine Lemuel Gulliver en divers pays éloignez suggested that a certain Gulliver was the author, and people did not draw the connection between this figure and the author of Le Conte du Tonneau (A Tale of a Tub), a work which had made Swift popular in France. However, the French were not slow in producing another translation of their own, announced in literary journals as early as April 1727. The translation, undertaken by the Abbé Pierre-François Guyot Desfontaines, was an instant success. The first edition sold out immediately, and a second had to be prepared. A review in the Mercure de France of May 1727 praised the translation as an extraordinary achievement, remarkable for its clarity of style.

Three volumes with engraved frontpeice. 10 plates. Contemporary calf half rubbed and worn. Loss and wear in places on the spine. 4 x 6 1/2

Ref: Just, M.M. The Reception of Gulliver’s Travels in Britain and Ireland, France, and Germany. There was also a Paris edition of the same date, but Teerink 371 gives priority to this Hague edition, stating it was published in January 1727. 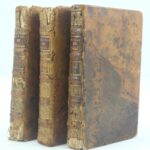