Animals and Plants under Domestication by Charles Darwin. | Rare and Antique Books 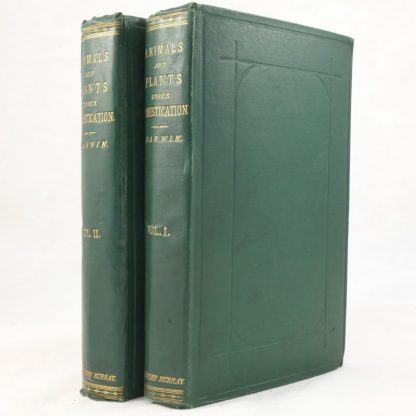 Animals and Plants under Domestication by Charles Darwin.

Animals and Plants under Domestication by Charles Darwin

Two volume set of Animals and Plants under Domestication. This first issue copy has the six line errata to volume I and seven line errata to volume II. Only 1500 copies of the first issue were printed and “represents the only section of Darwin’s big book on the origin of species which was printed in his lifetime and corresponds to its first two intended chapters.  A second section on natural selection has been transcribed from the manuscript notes by R. C. Stauffer and appeared in 1975” Freeman 877. The books contain book plates by “James Muir Dowie” who was married to Annie Dowie. Charles Darwin had corresponded to Mrs Dowie as noted in The Correspondence of Charles Darwin: Volume 23; Volume 1875.

The volumes contain 43 woodcut illustrations. 32 pp. Publishers catalogue dated April 1867 at the end of volume I, 2pp. Publisher’s list at the end of volume II. Original green cloth boards with gilt lettering on the spine with blind decorations on the boards. Volume II has slight bubbling on the cover. Slight marking in few places. Dark green end papers with owner’s stamp, “James Muir Dowie”. Foxing on the first pages. Stitching breaking at the front of volume II with leaves loosening. Volume II has a piece taken away from the outer margin with no loss of text on pages 63-64. Extremities are lightly rubbed. 8vo.