A rare issue of the first edition, first impression of Piccadilly Jim, published by Herbert Jenkins and noted on verso as printed by W. M. Brendon & Son. One of only 5000 printed, of which few survived. This is clarified in the later second impression of the first edition, printed this time by Love & Malcomson, in which it was stated that the first impression had a run of 5000, and the second impression had a run of  2000. With signature for the well known architect, Harold Tomlinson (1899 – 1951), from the Cambridge University of Architecture dated 1918. Original brown/orche cloth boards with embossed black borders and lettering. Spine ends worn and mild shelfwear/bumping of the corners. Wrinkled cover on the spine. Clean contents. 8vo 316 pp. 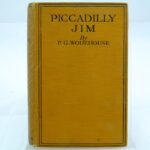