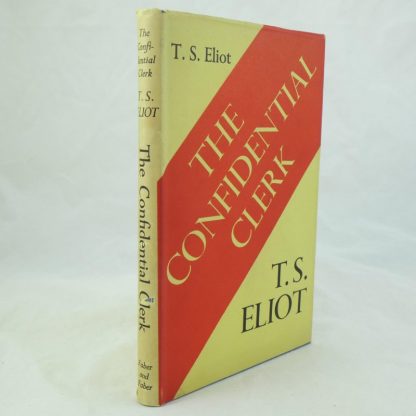 The Confidential Clerk with a signed presentation inscription to P. T. R. Gillet from the author on the title page. During Eliot’s time as a clerk with Lloyds bank from 1917 to 1925 Eliot befriended Gillett. Eliot joined the Board of Directors of Faber and Gwyer in the Autumn of 1925 and remained a Director of the company for over forty years. Eliot continued to send Gillett copies of his work as, on Gillett’s admission, “bank clerks have not too much money to spare” (Letter to T. S. Eliot, 6 Jan 1930). The play was produced with successful results at the Edinburgh Festival of 1953 and then in London. It is written in the same kind of verse as “The Cocktail Party“. The text is slightly extended than that used on the stage. Cast listed at rear of book. The first issue contains the typographical error on page 7.

Original blue cloth boards with bright gilt lettering on the spine. The contents are clean. The bright dust jacket is very lightly faded on the spine. Hole on the spine above “C” for Clerk. Minor chipping to extremities. 8vo 135 pp 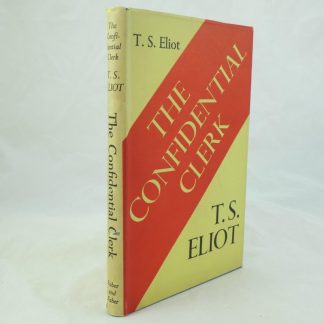 You're viewing: The Confidential Clerk inscribed by T. S. Eliot £1,250.00
Add to basket