A first issue with the typographical error on page 29. Signed by the author with the printed name crossed through on the title page. This edition of The Cocktail Party is the text of the successful play produced at the Edinburgh Festival in 1949 and repeated at Brighton later that year, preparatory to the season in New York. Several alterations have been made to the text, subsequent to the Edinburgh edition. A list of the original cast is included and the score of the song, One Eyed Riley.

Original green cloth boards with gilt lettering on the spine. Spine ends are lightly bumped. The contents are clean and lightly browned. The unclipped dust jacket has minor chipping to the extremities. Labels attached to the interior of the jacket. 8vo 170 pp. 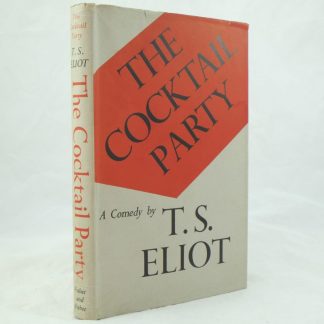