The Arrow of Gold by Joseph Conrad

The Arrow of Gold, A Story Between Two Notes, by Joseph Conrad

A first edition of The Arrow of Gold in very good condition. Originally titled “The Laugh”  the novel was published serially in Lloyd’s Magazine from December 1918 to February 1920. The book has an interesting provenance being in the library of Robert Milnes, 1st Marquess of Crewe, (12 January 1858 – 20 June 1945). Also known as The Lord Houghton from 1885 to 1895 and as The Earl of Crewe from 1895 to 1911. He was a British Liberal politician, writer and statesman.

Original green cloth boards with gilt lettering on the upper cover and spine. Top edge is green. Spine colour is darkened. Bookstamp of Robert De Crewe on the front paste down. Also a small bookmark form a bookseller. Front and rear pages are spotted. Otherwise the contents are clean. Bindings are tight. 8vo 336 pp. 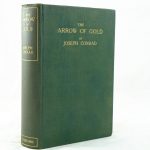