Charles Dodgson, or rather Lewis Carroll, is primarily known as the author of the children’s classics, Alice in Wonderland and Through the Looking Glass. Yet any collection of his works would be incomplete without recognising his expertise in the field of mathematics. In fact many of his fictional works combine his skills of creating fanciful stories and challenging logical and mathematical problems.

Charles L. Dodgson (1832-98) was the mathematical lecturer at Christ Church College at Oxford University, UK for twenty-five years. Teaching and simplifying geometry and mathematical concepts was an issue that greatly interested Dodgson and he was keen to develop an accessible approach to the subject. 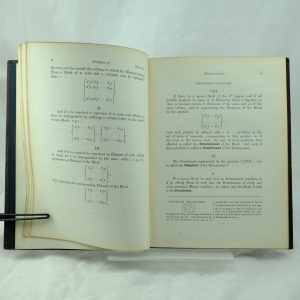 One of his earliest papers was published in 1866 in the Proceedings of the Royal Society of London concerning a method for evaluating determinants called the condensation method. His paper documented a new method to calculate determinants that was based on Jacobi’s Theorem. The first edition of the book was published in 1867 under the title of An Elementary Treatise on Determinants and is one of Dodgson’s most academic and also rare works. See our copy https://rareandantiquebooks.com/first-edition-books/elementary-treatise-determinants-charles-dodgson/

His later mathematical publications had a lighter feel. From his tutoring and coaching came the first of many published mathematical pamphlets. His style was to prepare stories, puzzles and other literary styles to explain mathematical concepts in a popular way. For example, although the play Euclid and his Modern Rivals (1879) was written as fiction, it is a defense of Euclid’s Elements as the best textbook for geometry scholars, an issue of contention at the time. In his introduction to the book, his skill at intertwining a playful approach to mathematics appeals to the non-scientific audience. It was around this time Dodgson invented his pen name as he thought he should distinguish his two types of writing, mathematical and fiction, yet he continued to intertwine these two themes in his future books.

One of Dodgson’s characteristic ways to encourage the public to become involved in his games was the inclusion of puzzles in popular magazines. For example, between 1880 and 1885 he published A Tangled Tale as a serial in the Monthly Packet. Dodgson used “knots” to signify the difficulty of the one, two or three problems it featured. His comments on the solution to the puzzle would follow in the subsequent issue often with amusing thoughts from the public on the problem. The book of The Tangled Tale was released in 1885 by Alexander Macmillan of Macmillan, who published all but two of his books over the thirty-five years of their friendship. Dodgson also presented several first editions of his books to public libraries, as with this copy of Symbolic Logic, donated to the Wigan Free Library in 1896. https://rareandantiquebooks.com/first-edition-books/charles-dodgson-symbolic-logic/

Dodgson’s love of making puzzles accessible to others is indicated with his publication of Doublets. A new puzzle was introduced into the magazine Vanity Fair in 1879 and Dodgson published a guide to the game with a glossary of suitable words to be used for future puzzles. This word game is now recognised as a popular brain teaser today.

In The Game of Logic Dodgson offers creative mental play to teach the fundamentals of logic and spatial representation of logical statements. He uses colourful ways of demonstrating the serious mathematical statements by using counters on a board in certain ways to denote cakes with certain characteristics (tasty, non-tasty, fresh, not-fresh). Dodgson employed his typical light-hearted approach to explanations using humour and absurdities to make a point as in, the “game” is for at least one player.

Of course Lewis Carroll, Charles Dodgson, is best known for his fictional books of Alice’s Adventures in Wonderland (1865) and Through the Looking-Glass (1872). Yet he managed to carve out a rare place in literary history by combining his interests in mathematics and fiction. His ability to seamlessly include challenging logic and entertainment have, over time, ensured a consistent appeal to readers and collectors alike .