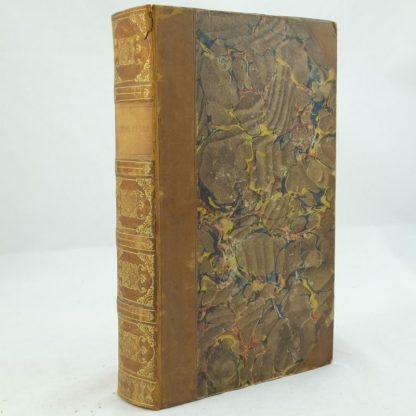 Charles Dickens was employed as the parliamentary reporter for The Morning Chronicle newspaper. From 1833 he wrote a series of sketches under the name of Boz.  The Sketches contains fifty six pieces of London scenes and people. The work is divided into four sections, “Our Parish”, “Scenes”, “Characters” and “Tales”. The first three consist of non-narrative portraits and the last section includes fictional stories. The earliest versions of Boz were published in two series, the first as a two volume set in 1836 and the second series produced in 1836. This book is the first combined edition of these two series. It contains 40 engraved plates after George Cruikshank.

Contemporary half calf boards with embossed gilt decorations on the spine by H. Bull, Devises (small stamp on front pastedown). Bookplate of G H Walker-Heneage of Compton Bassett on the front paste down. Marbled ends of the pages. The contents are browned and spotted. Spine has a 1″ tear on the front top edge. 526 pp 8vo [Eckel p19]