All 3 Volumes of the Adventures of Robinson Crusoe by Daniel Defoe 1719 - 1st edition set including the rare 3rd book in the series. | Rare and Antique Books 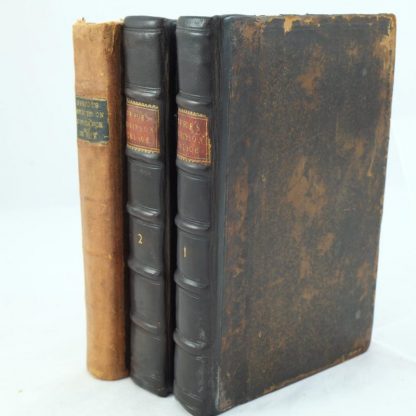 All 3 Volumes of the Adventures of Robinson Crusoe by Daniel Defoe 1719 – 1st edition set including the rare 3rd book in the series.

Printed for W. Taylor at the Ship and Black-Swan in Paternaster Row, London.

Scarce set comprising all three books in the Robinson Crusoe series. A very good set in very good condition. All volumes are rebacked in calf with Vol 1 and 2 having raised bands on the spine. The contents are in very good condition with a scattering of brownings and light markings. Covers are lightly rubbed and corners/edges a little worn. Bindings are tight. All octavo 20cm x 13cm x 3cm.

Volume 2: The Farther Adventures of Robinson Crusoe being the second and last part of his life. First edition 1719. Map is missing.

Volume 3: Serious Reflections of Robinson Crusoe: First edition. 1720. This volume was not as popular as the first two books so was never reprinted, making this the first and only printing. Few exists outside museums. This volume has excellent provenance as it was owned by Walter Wilson who was an evangelist of Daniel Defoe. Walter Wilson (1781–1847) was an English biographer of nonconformist clergy and their churches. Wilson was an illegitimate son of the founder the Times newspaper. He became a book seller and set up a shop in Mewsgate, Charing Cross where he collected Daniel Defoe editions. Wilson went onto write a three volume “The Memoirs of the Life and Times of Daniel Defoe” in 1830 which was well received. When his father died, Wilson was left a shareholding in the Times newspaper.

Bookplate with Walter Wilson printed on the paste down. Inscription to the front free end paper, dated March 11th 1832, as a gift from Walter Wilson to his friend James Plumptre. Light pencil markings on p112. Frontispiece of the map of the island with some episodes depicted, signed: “Clark & Pine Sc. 1719” is missing.