Published by Macmillan and Co, London 1893.

Dodgson was a friend of the Falle family, Joshua Falle, a Jersey judge and his wife and children. His diary entry for the 21st July, 1871 records that “Mr Falle gave me a photo of his second girl, Albina (Lily)“. He had previously written to the the judge, requesting if he could buy a print, stating “if you ever had a good one taken of your little daughter (a vignette of the head and shoulders would be the best form)”, advising that he had a “a very large collection of photographs ~(many of my own doing) including many portraits of my young friends”. Lily Falle never married and was in her late nineties when she died in 1957. 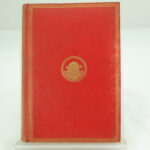