The Wind in the Willows by Kenneth Grahame

The Wind in the Willows by Kenneth Grahame

A first edition of this classic novel, The Wind in the Willows illustrated with a front piece by Graham Robertson. Original green front and rear boards with a professionally replaced spine. The covers are worn with frayed and bumped corners. Wear to the edges and soiled boards. Gilt illustration on the cover is good. Replaced end papers. The contents are spotted throughout  and page ends are browned. Top edge is gilt. 8vo 302 pp.

The Wind in the Willows is Kenneth Grahame’s most famous children’s novel after the success of The Golden Age (1895) and Dream Days (1898). In 1908 Grahame had retired form his work in the bank and moved to Berkshire where he took up “messing about in boats” and had  effectively given up formal writing.  This story of the animals on the riverside was originally told in bedtime stories and letters to his poorly son, Alistair. Initially the publishers had limited expectations of it’s success. Yet it became very popular even though it was in plain text. Many illustrated and annotated versions were released over the years. Most notably publications by  E. H. Shepard in 1931 and Arthur Rackham in 1940. In it’s thirty third publication it was adapted for the stage into a play, Toad of Toad Hall, by A. A. Milne in 1929.

Browse other editions of Kenneth Grahame. 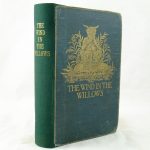