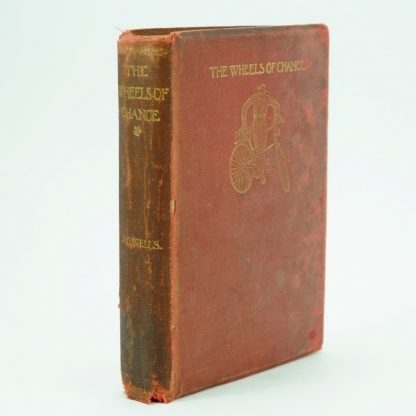 The Wheels of Chance, 1st Edition by H. G. Wells

An early publication by H. G. Wells with some wear.

The Wheels of Chance, First Edition by H. G. Wells

The Wheels of Chance was written at the height of the cycling craze (1890–1905), when practical, comfortable bicycles first became widely and cheaply available and before the rise of the automobile. This new freedom affected many. It began to weaken the rigid English class structure and it gave an especially powerful boost to the existing movement toward female emancipation and Wells explored these social changes in his story. The hero is Mr. Hoopdriver, a frustrated “draper’s assistant” in Putney, a badly paid, grinding position and he sets out on a bicycling tour of “The Southern Coast on his annual ten days” holiday. Hoopdriver survives his frustration by escaping in his imagination into a world of fantasy. He is not a skilled rider of his forty-three-pound bicycle and his awkwardness reflects both Wells’s own uncertainties in negotiating the English class system and his critical view of that society. H. G Wells used real places in plotting the novel and the entire route can be followed on a map, among the sites described in the novel are Ripley, Cobham, Guilford and other towns in the south Coast.

Original red buckram cloth hard boards with rubbed gold gilt motif of bicycle on the front cover and some discolouring of the covers. Spine darkened with frayed ends. Cover worn and corners bumped. Gilt page end rubbed and worn. Two library stickers on front paste down and pencil 3/6 written on free page. Binding split in several places, particularly on p 160 and in fragile condition. Forty illustrations throughout the text. Pages browned and marked in places. 8vo. 313 pp plus 10 pages of book reviews at the end.