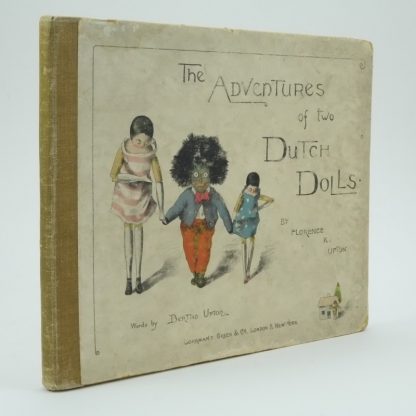 The first of the popular children’s Golliwogg series and rarely seen in such great condition for this age.

Original cream glazed pictorial boards with tan backstrip. Sun illustration on the back board. Decorative and browned endpapers. Illustrated with 31 full colour-lithographed plates and decorations with brown vignettes throughout. Pen signature and date of 1897 on front free page. Unusually free from significant scribbles and tears, making this copy more rare and valuable than most others. Bindings split on front page. Small, up to 1″, tears on page 16, 22, 46, 54 and 64 however does not distract from the impressive condition of this antique children’s story. Oblong format, 28 x 21 cm. Page numbers 23/4 and 55/6 have been used twice. The Adventures of Two Dutch Dolls First Edition is in very good condition for it’s age.

The tale describes the night-time adventures of peg Dutch dolls who come to life at midnight in their toy shop. They clothe themselves in the American flag and meet the Golliwog who initially scares them. However, they soon become best friends and end up rescuing him from danger.

The Upton mother and daughter wrote and illustrated 13 Golliwogg books. In this first publication the Golliwogg was positioned as a supporting character to the Dutch peg dolls as he was illustrated in just over a third of the pictures. However, the Golliwogg became so popular that he became the main character in their following publications, which have become increasingly rare over the years and are now considered valuable antiques by most booksellers. In all of the Upton books the Golliwogg is presented as friendly and kind, unlike in later imitations where he could be portrayed in a more negative light.