The Diamond Smugglers by Ian Fleming | Rare and Antique Books 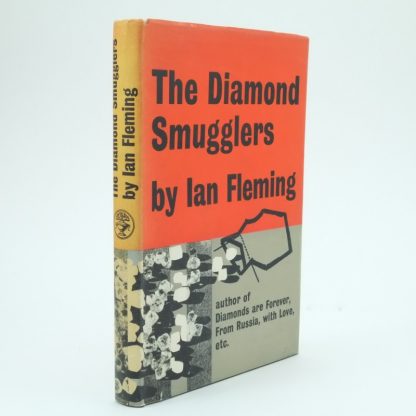 The Diamond Smugglers by Ian Fleming

Complete with 35 photographs and maps, and a dust jacket in very good condition.

The Diamond Smugglers is one of Fleming’s two non-fiction works. It is a departure from the author’s more usual 007 James Bond novels and so makes an interesting addition to any Ian Fleming collection.

The Diamond Smugglers is Ian Fleming’s fifth publication inspired by an article he read in The Sunday Times about the Sierra Leone diamond industry. This non-fiction work was compiled after several weeks of interviews with John Collard. He was a member of the International Diamond Security Organisation (IDSO), which was formed to deal with the smuggling of millions of pounds worth of diamonds and gems from Africa. The Diamond Smugglers was made the subject of a series of articles which appeared in the Sunday Times during September and October 1957 and contains an introduction by John Blaize, formally of the IDSO. Cartoon by Bob Connolly facing the title page. Three maps and thirty photographs included within the text.