The Adventures of Sally by P. G. Wodehouse

The Adventures of Sally by P. G. Wodehouse

The Adventures of Sally features a young American woman who inherits a fortune of $25,000. The initial story was published as a serial in an American magazine, Collier, in late 1921 and then in an English magazine, The Grand Magazine, in 1922. The book proved to be so popular that is was released by both British and American publishers.

Original orange cloth boards with illustrations on the front board. The spine ends are a little bumped.  The edition is slightly cocked. The covers has bubbling on the front cover. Publishers logo on the rear cover. Internally the book is clean. 12 mo 312 pp with publishers advertisements at the end of the book. 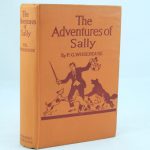